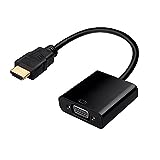 Overview:
This HDMI-to-VGA Adapter can takes the HDMI output from your laptop or desktop computer and converts it to VGA for connection to a VGA input on a monitor or projector. Use your existing VGA cable with this convenient adapter that allows for connection to modern PCs with only an HDMI output.

Tips:
If you’ve shopped for an HDTV, a PlayStation 3, or an HD-DVD or Blu-ray player, you’ve probably heard about HDMI.
Before HDTVs, most TVs displayed pictures in what is now known as standard definition. The picture was roughly square — its aspect ratio was 4:3. Its resolution was about 704 x 480 pixels. The picture was interlaced — each piece of the moving image was really half a picture, but the pictures changed quickly enough that the human brain didn’t really notice. Finally, older TVs relied on analog signals, which travel as a constantly varying electrical current.
HDTVs, on the other hand, are digital. They use information in the form of ones and zeros. This information travels through cables as distinct electrical pulses. HDTVs have an aspect ratio of 16:9, so the picture is rectangular. They also have a higher resolution — current HDTV standards allow for resolutions of up to 1920 x 1080 pixels. HDTV signals can also be progressive, meaning that the each frame of the moving image is a whole picture rather than half of one.
So, compared to standard TVs, HDTVs have a wider screen, more pixels and a faster refresh rate, means that HDTVs need more data and need it a lot faster than standard-definition TVs do.
This leads us to HDMI, a set of guidelines for creating high-bandwidth connections between digital devices.